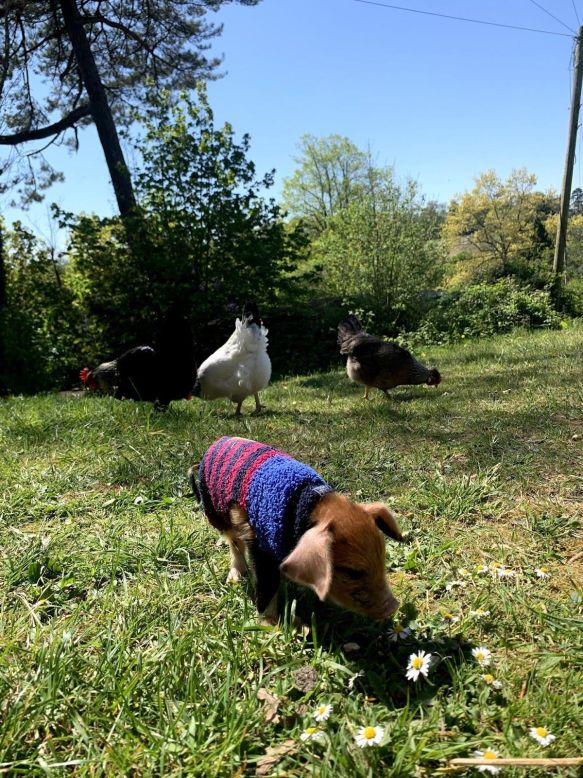 On 5 April our Oxford Sandy and Black sow ‘Little Pig’ gave birth to 13 piglets, immediately jostling and squealing to be fed around the clock. Piglets are born with a set of needle sharp teeth, slightly protruding from the sides of their mouths – which they use to defend their chosen teat (they pick one and they stick to it). In commercial pig rearing settings, piglets will have these teeth clipped or ground down to prevent them from injuring each other, which is something that we don’t do here on the Bedales farm, for obvious welfare reasons. We leave mum and babies to get on with things as nature intended. Likely because of the size of the litter, competition for teats was even higher than normal and after a week or so we noticed two of the piglets had some scratches to their faces and were beginning to look weaker and smaller than their siblings. Sadly we lost one of the two, it died at 10 days old, and it looked as though, without some help the second piglet would soon die too. The decision to bottle feed a baby animal is never an easy one – once humans step in that animal loses out on the perfectly tailored nutrition, warmth, and security that its parent provides, not to mention the playtime and social lessons of being part of a litter. Still, there are always exceptions, and having done some research I knew that the only thing this little piglet needed was some milk in her tummy and somewhere warm to sleep. The scratches on her face were causing her eyelids to become swollen, so she couldn’t find her way to mum’s teats for a feed. She was basically getting weaker and weaker, and not able to hold her head up anymore. At this point I decided to take her home.

My partner Lisa and I managed to make up some emergency piglet milk – full fat cows milk, egg yolks and honey, and we set about trying to get Bridget (as we named her) to drink. Bridget’s first feed was only 2 ml, but it was enough to get her through the next couple of hours. She was tiny, wobbly and weak, but we settled her onto a heat mat, made her a jumper from a sock and surrendered ourselves to two-hourly feeds, even through the night. I’m pleased to say that within a week, Bridget started to show signs of improvement and a feisty character emerged. She became firm friends with our collie, Fennel, and let us know when she was hungry with a bossy squeal and much determined nudging. Meanwhile, her brothers and sisters were moving from the pig sty into the Bedales woods and were almost twice her size. We worried she might never catch up.
Weeks passed, lockdown continued and the piglet in our living room grew out of the sock
jumpers and into a puppy crate under the table. She started playing with the dog and following us into the garden, running around and oinking enthusiastically. Pigs are very intelligent creatures, and Bridget learned to sit on command (with food encouragement) and even trotted beautifully to heel! I took her with me to feed the other Bedales animals and we met lots of the on-site community on our walks. It became clear, sadly, that Bridget would soon outgrow my small flat, and that a move outside was on the cards. Having been roughly the size of a guinea pig, Bridget was now the size of a small spaniel, and had worked out how to open the fridge door – oh dear.

Bridget’s siblings were all sold on to lovely new homes (some of whom are Bedales and
Dunhurst families) at the age of 8 weeks. We have our two sows here already, as well as two piglets kept on, so I began to research a new home for Bridget, somewhere she would be provided with the tubby rubs, cherry tomatoes and toast crusts to which she had become accustomed.

Manor Farm near Southampton is a council-run working historic farm open to the public who are able to see up-close their various native and rare breed livestock, in the Victorian farmyard. After a visit to the school to meet Bridget (who behaved very well) the staff at Manor Farm were sure that her clear star-quality (I might be biased) and friendliness with people would make her a great pig to take on. A week or so later, this Tuesday just passed, we loaded Bridget up and drove her over on a bright sunny afternoon to her new home. The farm there (like us) is still closed because of Coronavirus, but they hope to have Bridget well settled in by the time their visitors return this Summer. She will soon be joined by a pair of Tamworth piglets, who will be
closer to her in size than her own siblings, we hope she will enjoy some pig company. When she’s old enough she’ll have her own piglets to look after, and best of all – we’ll be able to visit whenever we like. Lockdown, even on the beautiful Bedales site, has been a confusing and anxious time for everybody, but taking care of this little pig has bought lightness and laughter into our lives, a reminder of the power that animals have to help us stay grounded through difficult times. Thank you Bridget.