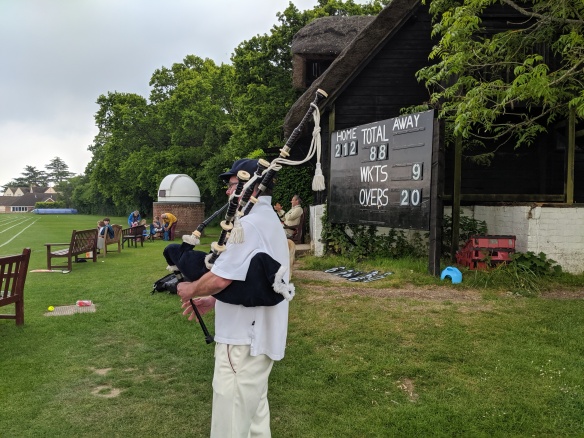 Having packed away your cricket gear a few years or even decades ago and just stuck to watching professional and test match cricket ever since, have you ever wondered if you could still play that match saving innings, finally take that elusive hat-trick, or indeed, actually hang onto that catch?! Here’s your chance!

The Gentlemen of Bedales Cricket Club (GoBCC) was formed in the early 2000s and emanated from the annual social game between Dunhurst parents and teachers (which, incidentally, this year is on Friday 7 June at 4pm).

GoBCC now has around 12 social fixtures against local village teams each year, generally from April through to the end of June. Home games are played on the fabulous and picturesque Bedales Memorial Pitch – probably one of the best village cricket venues in Hampshire. Local village teams love coming to us for our home fixtures.

Last Sunday’s game against the Hambledon Invitation XI (HIXI) featured the HIXI opening batsmen being piped onto the field. GoBCC won by 124 runs with five minutes to spare before the heavens opened.

If you are interested in playing some social Sunday cricket, see the contact details on the GoBCC web page.