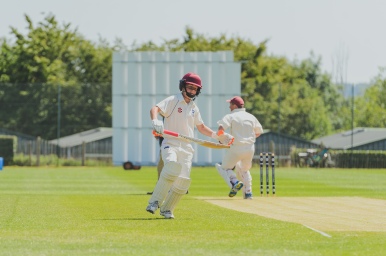 Parents’ Day saw the annual Stoner CC vs Bedales Invitational XI take place. The Bedales side was a wonderful mixture of varying year groups and staff. Having won the toss, new captain Gordon Dale elected to bat first. Unfortunately, having scored a plethora of runs this season, Bedales lost opener Hugo Napier-Munn in the first over.

However, David Mann (22) was there to settle the ship and was ably supported by Block 3 Zach Stewart (27), who has been in fine form this season. The demise of David saw the arrival of Block 5 Sam Wheeler (32) to the crease who built a wonderful partnership with Zach, steadily increasing the run rate and setting a solid base for the remaining Bedales batsman.

A flurry of runs and wickets made for an exciting final few overs of the Bedalian innings. Cameos from Chris Bott (14) and Gordon Dale saw Bedales post a competitive 135 from their 25 overs.

After a wonderful tea in the marquee overlooking the Mem Pitch, the teams retook to the pitch and the Bedales side got to a flying start with Block 3 Josh Baty, bowling Justin Jones, often a danger man in these fixtures, with his first ball. From here on in the game ebbed and flowed and it was going to be incredibly hard to call a winner.

Al McConville was looking imperious at the wicket for Stoner, seemingly scoring runs with ease, so it was crucial when the leg spinning Sam Wheeler picked up his wicket with Al on 46. At this point, the Bedales side were very much on top but the arrival at the crease of Paul Bradley for Stoner changed things dramatically. He scored a rapid fire 46 which took the game to the final over with Stoner needing 4 to win from 6 balls… cometh the hour, cometh the man.

Chris Bott was tossed the ball and tasked with defending the Bedalian total. Chris was not phased and bowled an impressive over, claiming the wicket of the free scoring Bradley and conceding only two runs to ensure a Bedales victory in a closely fought contest.