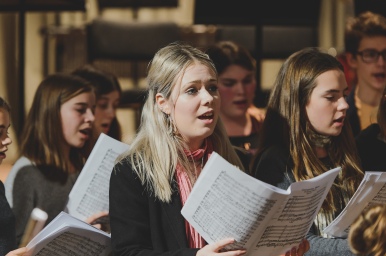 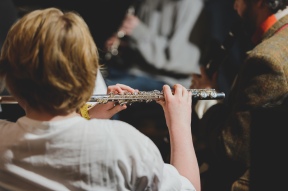 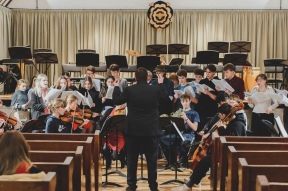 By Annia Grey and Jonny Greenfield, 6.2

On Wednesday night, Bedales musicians embarked on their annual Cecilia Concert, which this year took place in the Lupton Hall. It was a night of uplifting and challenging choral and instrumental music, covering a multitude of musical styles ranging from Renaissance to modern jazz, showcasing the sheer volume of talent at Bedales.

The concert commenced with the Orchestra boldly and sensitively performing the first movement of Schubert’s Unfinished Symphony (pictured above during rehearsals), which was conducted brilliantly by the Director of Music, Doug McIlwraith.

This was followed by the Student Orchestra, directed by Sampson Keung and Mary Wang, who demonstrated impressive leadership and conducting skills. Weeks of rehearsals and hard work paid off when they performed Elgar’s famous Chanson de Matin and Chanson de Nuit with much conviction and energy.

This led nicely onto showcasing the hard work of the Chamber Choir, who sung Peter Phillip’s O beatum et sacrosanctum diem and Eric Whitacre’s Sleep. The audience were very moved and impressed by the standard of singing, especially in Whitacre’s challenging and dissonant Sleep which soared up to a thrilling climax with a top A.

The Percussion Ensemble followed, performing four contrasting pieces including Vivaldi’s Autumn with vigour and energy. The Jazz Band concluded the concert, leaving the audience elevated and on their feet – Cuban style! They performed Duke Ellington’s C Jam blues and the audience were hugely impressed with the improvisation skills of Bedales’ jazz players.

Numerous staff members have been working really hard supporting the Bedales music groups. Special mention has to be given to Doug McIlwraith, Laura Senior, Phillip Guy-Bromley, Will Lithgow, Neil Hornsby, Jerry Banks, Nic Saunders, Clare Jarmy and Keir Rowe for their inspirational lead in ensembles and sectionals, making the music department what it is. Thanks also to the students, for their the commitment and talent, and the audience, whose generous donations raised £620 for the John Badley Foundation.