Giving students the opportunity to see science in action is not easy during these strange times, but the University of Oxford did a brilliant job this week by holding a virtual chemistry conference.

Sixth Form chemists and biologists were treated to an excellent talk by Professor Angela Russell, on the subject of ‘Cures from within: can we use chemistry to teach the body to heal itself?’ Her research is looking into creating a molecule that can stimulate the body’s own ability to regenerate cells. Her target disease is Duchenne Muscular Dystrophy, which primarily affects boys; those with the condition are unlikely to live beyond their early twenties due to the muscle degeneration that affects organs, including the heart and diaphragm.

Angela took us through the breakthroughs and setbacks she has experienced, as well as the direction in which the research is currently heading, which looks very positive. It is a hugely significant area of research as it opens up the door to being able to use the same kind of treatment for diseases like Alzheimer’s.

Angela talked about setting up a private company, highlighting the importance of the link between academia and the private sector in being able to bring this kind of research to life.  Most importantly, when asked about which degree is best to study, she said that in her opinion Chemistry was much more useful than Biochemistry or Medicine for this particular area of research. Please make a note of that all Sixth Form chemists! 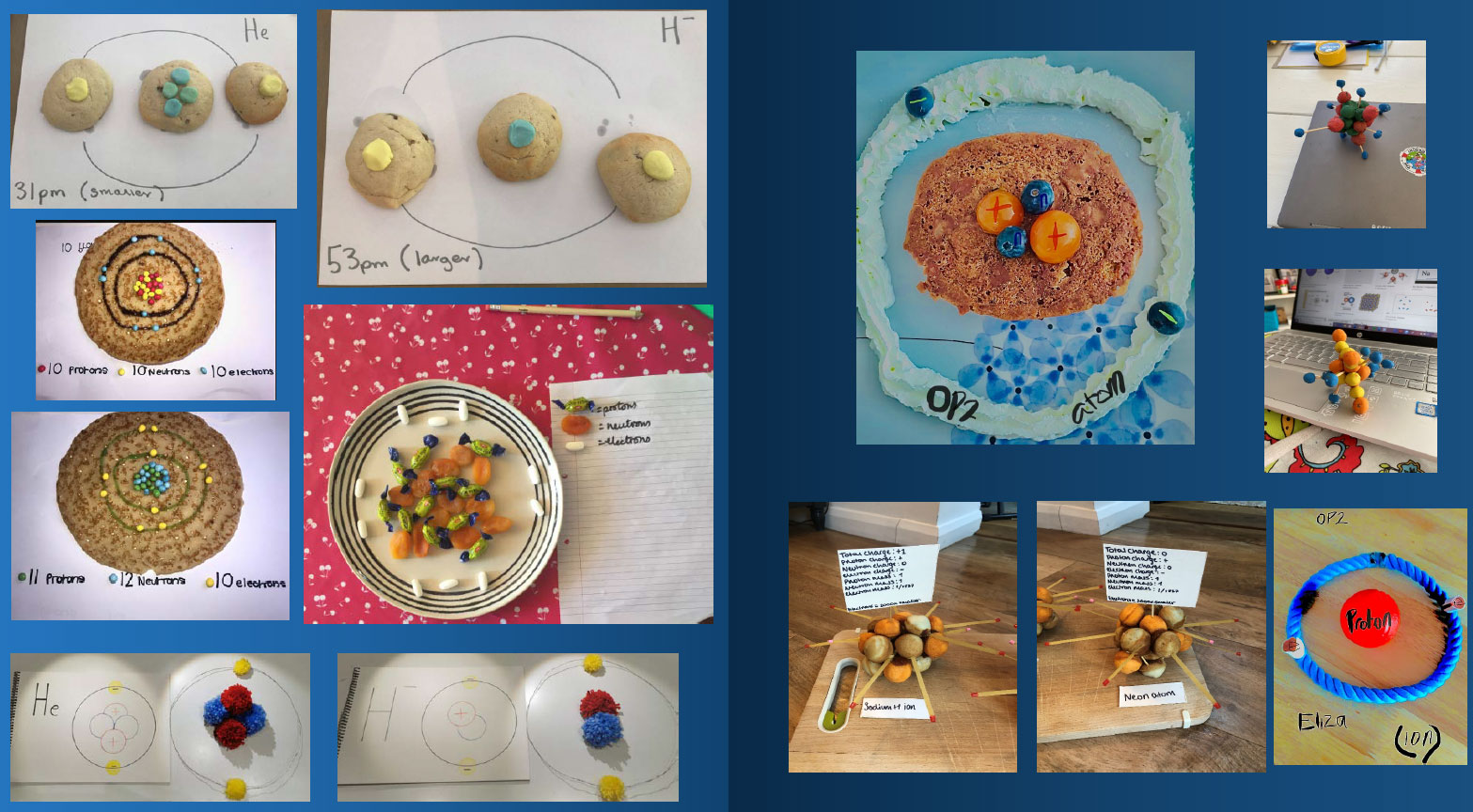 By Olly Hoult, Teacher of Chemistry

This week the Chemistry Department instructed Block 3 to construct models an atom and an ion as part of the Atomic Structure and the Periodic Table topic. What makes Chemistry such a challenging subject is that it involves studying a broad range of abstract concepts. Learning about atoms and ions is an example of this.

The building blocks of the universe are so small they are almost impossible to visualise. Therefore scientists use models to help conceptualise the mysterious quantum world. The model of the atom is ever evolving as scientists produce new experiments which question previously accepted theory. We believe model building is a necessary tool in science teaching as it gives students a more authentic experience of the scientific process while as teachers it gives a more detailed insight into what students have learned from this topic. In these challenging times of remote learning we also felt the task was useful as an exercise to get students off their screens and really let their creativity take over.

Joel Edgeworth has this to say about his model: “For my atomic model project I made a neutral neon atom and a positively charge Sodium ion. For my project I used pizza boxes and the stands which the pizzas are held on. I made two models for each particle, the nucleus and the electronic configuration, and I used a tea grain to show the relative size of a nucleus in proportion to the rest of the atom / ion.”

END_OF_DOCUMENT_TOKEN_TO_BE_REPLACED

Right now, more than 90% of the world’s population are living under travel restrictions. These restrictions have heavily affected people’s lives financially, socially and mentally.

So, is the travel ban actually effective in stopping, or at least reducing the spread of COVID-19?

Travel bans range from restricting movement within the country or travelling internationally.

When the severity of COVID-19 was first globally known after its first death on the 10th of January, there were already 41 clinically confirmed conditions reported.

By the 22nd of January there was 571 confirmed cases and 17 deaths reported, with cases already reported in other countries (such as Hong Kong, Macau, Taiwan, Thailand, Japan, South Korea, and the United States, shown in the image below) 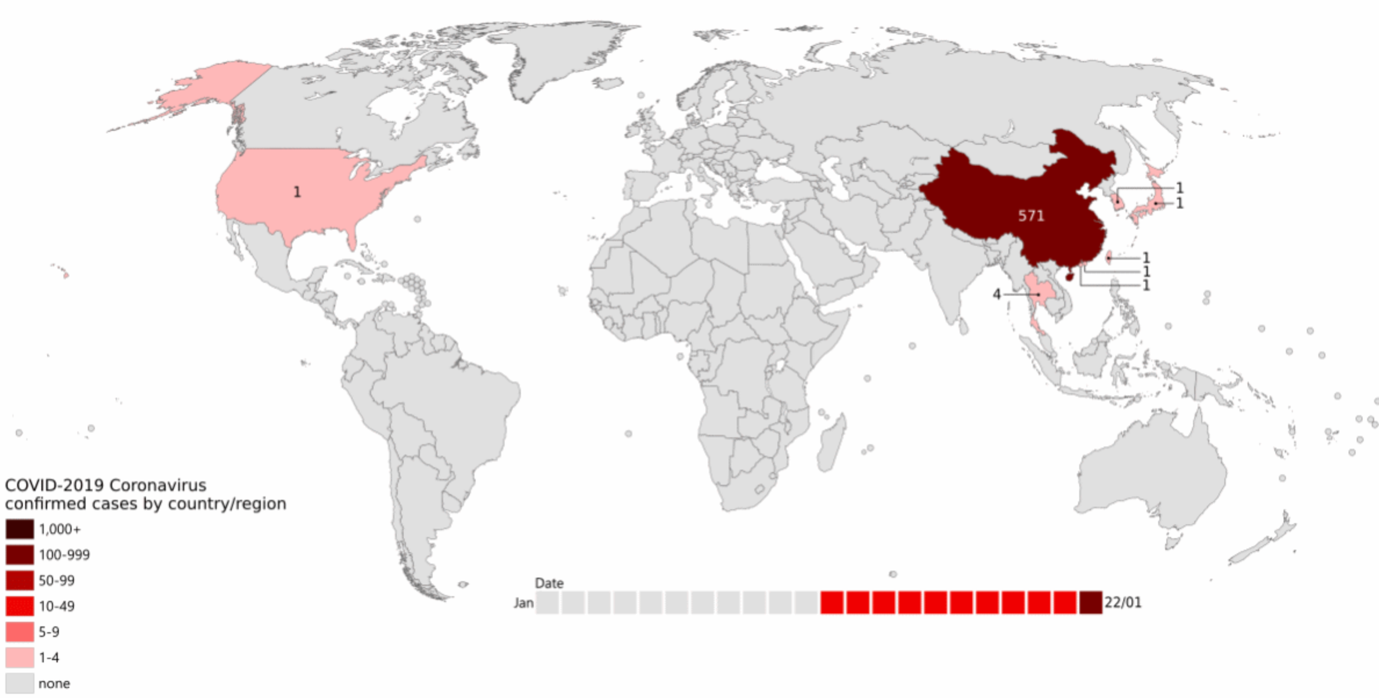 At 2am the next day, the Wuhan authorities issued a notice of the travel ban that would be set at 10am. However, before 10:00 an estimated 300,000 people had left Wuhan – this figure was fuelled by the wishes of the population to be with their families for the Chinese New Year happening 2 days later. Within a day after this lockdown was set, 24 other cities in the vicinity of Wuhan also went into lockdown.

Although the travel ban didn’t manage to contain all people within the city, it definitely played a very important role in decreasing the rate of the spread drastically.