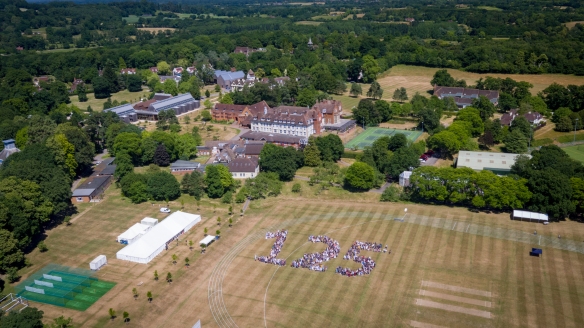 Keith Budge leaves Bedales at the end of this academic year. This final blog is based on his last school assembly.

As I contemplate the end of my time with Bedales, I am minded to think about journeys. Last week, in a very literal sense, I was part of a group of 24 that walked from the original Bedales home in Lindfield to Steep. This journey – all 125 km of it (I completed the first 70 of them) – marked the 125th anniversary of the school’s birth, and so I have also given thought to this rather more abstract journey.

The story of our walk from school to school is pretty straightforward. We had the idea, and it generated some enthusiasm and support. There was planning, resources, logistics, administration, risk assessments, food, water, maps, sun cream; and above all a group of people who wanted to make it happen. Substantially, that the walk was a success was the result of our teamwork.

It’s more difficult to tell the story of the first 125 years of Bedales’ existence, but two really striking things occurred to me vividly over the past week as I walked. The first of these is how very unlikely it is that the school has survived and prospered. John Badley’s idea in the early 1890s that he would start a school and that it would be based on such very different principles to the ones that enabled schools like his – Rugby – to thrive, was pretty left field.

The second striking thing, and this chimes with the story of the walk coming together, is the extent of the teamwork that enabled the fledgling creature that was early Bedales to take wing. Those of you who have followed my blogs will know that I have written regularly about John Badley. His story is well known, and so I will concentrate here a little more on the other two members of the founding triumvirate. Amy Badley, a suffragist, brought a passionate belief in women’s suffrage and women’s rights. She was, some believe, the driving force behind the introduction of girls to the school in 1898. Oswald Powell, or ‘Oz Boz’ as he was affectionately known, was multi-talented (a musician and modern linguist), and brought a great capacity for making things work.

What must it must have been like in those early days of the school’s existence in Lindfield, in Summer 1893? Fortunately, we have Oz Boz’s account to guide us – and what a fascinating read it is. You can hear in his voice the sheer daring of the school’s founding and the gamble he was taking, moving from Manchester Grammar School to join such a madcap scheme. His passion for this place “where we could all learn by doing and haply teach by being and so revolutionise English education” is both palpable and infectious. This is no po-faced account, however – he cheerfully confesses to feelings of incompetence when observed teaching History by Badley, and a comic note is struck when he talks about giving a lecture one Saturday evening on the subject of bee-keeping, despite never having kept bees. By a great quirk of fate, and with charming symmetry, his grandson, Ben Powell, joined us on Day 2 of our walk, so we heard more about Oz Boz from him.

Powell died just short of his 100th birthday; Badley reached 102. I suspect that it was this enduring partnership and the complementary qualities that they brought to it that enabled the school to be what it is today. Badley supplied that informing vision, the passion; but it would have been as nothing without the ability to deliver the goods, at which (amongst other things) Oz Boz excelled.

My final thought about the journey, and the quality that has enabled the school to thrive, is its ability to innovate and to welcome change. Whilst the school has been single-minded in preserving its founding ethos, we should remember that it is a particularly distinctive and nuanced one that invites reinterpretation by successive generations. Indeed, I particularly like Oz Boz’s take on it – that we all (staff and students alike) learn by doing, and in that process remake our idea of education. Such an approach, allied to such an ambition, is demanding: we each of us need to be part of a process of continual self-scrutiny, to share a restless determination, and to be willing to change as we each of us help shape this school’s extraordinary journey.