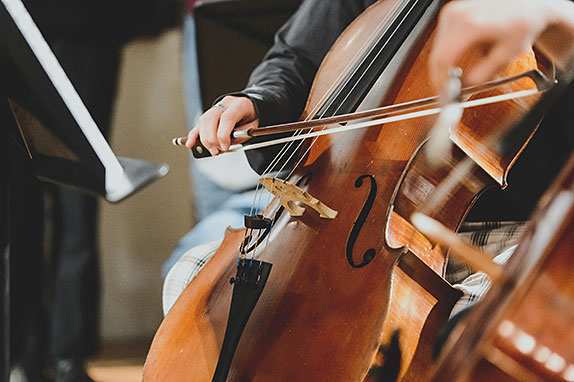 After a term’s worth of rehearsals, the long-awaited Spring Concert took place on Wednesday. An exciting programme full of a wide variety of styles laid ahead of us and finally it was ready to begin.

The concert opened with a raucuous and flamboyant piece: Rossini’s overture from The Thieving Magpie. The catchy melodies and high energy was perfect to open the concert, and with the equally fun conducting from Bedales Prep, Dunhurst’s Director of Music, Ben Harlan, the stage was set for a very enjoyable concert full of pieces to please.

The orchestra followed with the two most popular pieces from Grieg’s Peer Gynt suites: Morning and In the Hall of the Mountain King. Morning showed off the warm strings’ and delicate winds’ evident practice, resulting in a truly beautiful piece played with the beauty it deserves. There wasn’t long to wait before everyone was on the edge of their seats again as they listened to the ever increasing tension and drama of In the Hall of the Mountain King, conducted by 6.2 student and Music Don Sampson Keung.

Brass and winds took a back seat as the string orchestra played a fun and folky piece by Holst – Jig from his St Paul’s Suite. Laura, Bedales’ violin teacher, led the group through a winding, fast-paced journey that showed off all the tropes of English folk music. From rural England to the patriotism and strength of wartime America, Fanfare for the Common Man. This piece’s opening could’ve been mistaken for that of Superman as it was one of the most influential pieces for John Williams’ theme. The triumphant brass and dramatic percussion were pulled off excellently and it perfectly captured Copeland’s aim: ‘The Common Man’ in a time where nothing seemed to be ‘Common’ at all.

The chamber choir had a tough act to follow but succeeded completely with a stunning performance of Bob Chilcott’s The Making of the Drum. Bedales Director of Music Doug McIlwraith led five movements of rhythmically and harmonically complex singing, and percussion playing detailed the sanctity and religious prominence of drum making in Ghanaian culture. More singers then joined, and together performed an evensong ceremony they had recently done at Queens College Cambridge as part of a school trip.

The first piece: Richard Farrant’s Call to Remembrance was first sung when the tradition of evensong first began in Queen Elizabeth I’s reign and has remained popular to this day. Up next was a much more modern piece, George Dyson’s Magnificat and Nunc Dimmitis in D. This piece is a non-stop twisting and turning rollercoaster of dramatic choral harmony that the choir thoroughly enjoyed singing with frequent fortissimos allowing the grand sound of the full Bedales choir to be heard at its best. To finish the choral concert was Haydn’s Insanae et Vanae Curae, an anthem that depicts the darkness and impurity of mankind compared to those of the heavens. The intense sections contrasted with sweeter, calmer showed off the choir’s range of styles and the togetherness they had developed over the term.

Taking a large leap from Haydn to Ellington, next was the Jazz Trio with Take the A Train. Joel Edgerton (Block 3) showed off impressive solo skills on the piano with Kai Mcrae (6.1) and Monty Bland (Block 5) accompanying with maturity beyond their years. The jazz trend continued with the Jazz Band playing two pieces by two more jazz greats. They started with Miles Davis’ classic So What and from the opening chords everyone was hooked, the tight rhythm section kept the groove going throughout underneath exciting solos on trumpet, saxophone, trombone and drums.

The Jazz Band closed with concert with Jaco Pastorius’ smooth and funky The Chicken. This was a great end to an equally amazing concert, with almost every aspect of Bedales’ Music department having a chance to share what all their hard work and countless rehearsals had been for. From Norway to Africa to New Orleans, it was a spectacular occasion for the range and ability of the young musicians to be shown off. Everyone left with a melody in their head or a piece to look up and listen to on the way back home, and it was a thoroughly enjoyable concert for both the audience and performers.