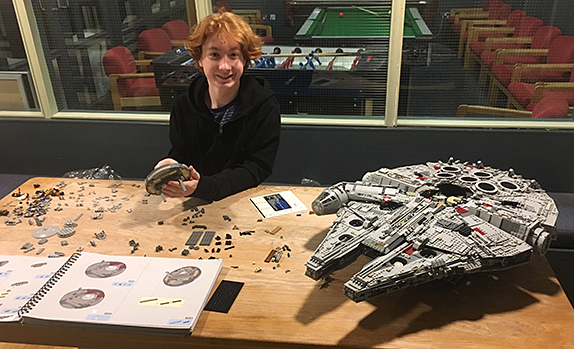 In between finishing off prep, helping with a refugee charity and hanging out with friends, I built every Lego fan’s dream, The Collector’s Edition Star Wars Millennium Falcon, which was kindly gifted to the students of Boys’ Flat at Christmas.

After my morning lessons on Saturday, I – along with significant help from history teacher and house parent Chris Bott, as well as Block 5 student Teo Sydow Elias – set to work on unboxing and starting the build. We started at 1pm on Saturday and worked until late into the evening, stopping only for dinner.

My help on the project was halted on Sunday morning by an early start for some volunteering work with the Rural Refugee Network, as organised by Al McConville. I and several others helped set up and martial their Walk for Hope, a charity walk that raises money to help support Syrian refugees in the UK. Fellow 6.1 student Eloise Cooper helped man the drinks stall at Elsted Village Hall for another fundraiser, which included raffle tickets, cakes (courtesy of Outdoor Work) and drinks as ways to raise money. There were several touching speeches from founders of the charity and also some of the people who they have helped arrive and settle in the UK.

After a fulfilling morning, it was back to Bedales and back to work. We continued diligent work on the Falcon until dinner. Straight afterwards, I joined a friend to finish our music prep for the week and I now had a tight time frame to finish the build before the weekend was over. Lots of time, effort, and enjoyment later we arrive at the largest Lego set being on display in Matron’s surgery for all of Boys’ Flat’s residents and visitors to see.

This has been by far my favourite weekend at Bedales yet, full of fulfilling and exciting things to do and lovely people to do it with. Not every one of my weekends turns out as busy as this -if I need a lie in and just some well deserved rest and relaxation, then that’s a welcome option too. Everyone’s weekend is different, and the luxury of choice allows everyone to get what they need or want out of their day and a half off. A very holistic and utterly Bedalian approach to down time!