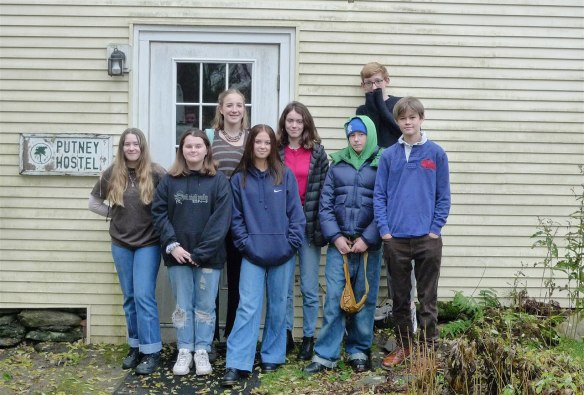 By Alastair Harden, Teacher of Classics and Day Housemaster

For this year’s exchange visit to the Putney School in the United States, Chloe Hamill and I have escorted eight intrepid Bedalians as they shrug off a week’s recuperation in the October half term for a fortnight of honest toil in the Vermont countryside. The trip is part of an annual programme which places our students in a setting that draws enlightening points of comparison with what we offer at Bedales.

The Putney School’s entire structure is built around student responsibility, from washing the dishes to milking the cows, raking the leaves and sorting the recycling, in an educational environment where the onus is clearly on the students to manage their education alongside the smooth running of the community. Each year we look forward to this quiet hive for inspiration, and each year the students bring home big questions and big ideas.

After a seamless departure from Terminal 3 at Heathrow, with only a little heavy turbulence and a few long delays. On landing, we were picked up by minibus from Boston Logan and deposited at 1.30am Eastern Daylight Time at the Hostel on Lower Farm, a rough and ready sort of guesthouse on the edge of the school estate, where the hot water only comes if you ask it nicely. 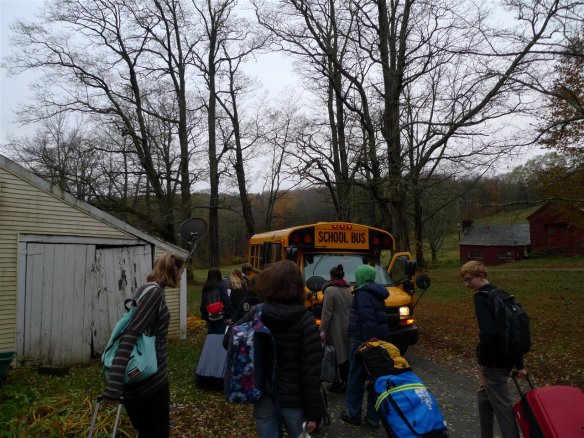 We were picked up at 7.30am by our host, Daniel, and taken up to the main school site. It was on this journey that the students learned that the yellow colour of American school buses – which never fails to amaze visiting Bedalians – is called ‘School Bus Yellow’ and is a mandatory requirement for all school buses which collect students on their way to school. If it ain’t yellow, it ain’t a real school bus. 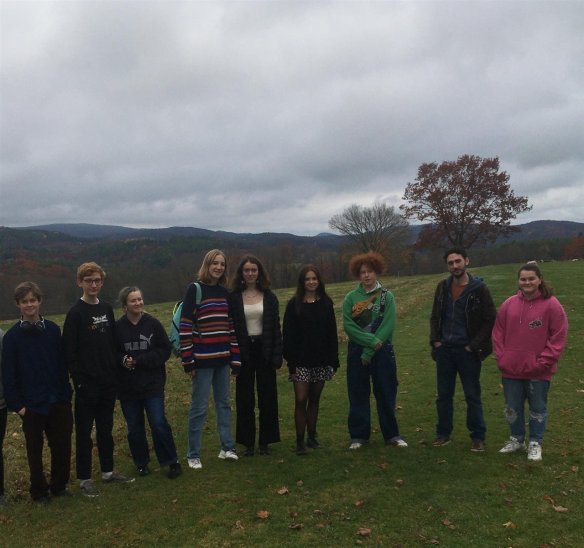 We tumbled into breakfast at the Kitchen and Dining Unit (“the KDU”) to a welcoming cheer from the few Putneyites who were lingering over their cereal and coffee: breakfast at Putney is heavy on the milk and yoghurt, as befits a school with a productive dairy herd. With disappointed groans we learned that 6am barn duty was no longer available to students in Grade 9, which ruled out the Bedalians from the joint pleasures of shovelling out the iconic red barn and then getting first dibs on the coffee and home-made bagels when the work is done.

After leaving their luggage at their ‘dorms’ (boarding houses), the students gathered for the whole-school assembly and got a taste for the forthrightness and uniqueness of this singular place. After our visit was announced, and the Bedalians received a more hearty cheer from the assembled students, the normal Putney business began.

First, a student got up to relay the results of an unfathomable ‘flag challenge’. This involved a lengthy run-through of all the nationalities which are represented by Putney students, with a group of kids leaping to their feet and getting a cheer when, for example, “Botswana” was called out. Mention of Hong Kong caused a bit of a stir when the Chinese student who was convening the assembly frostily and quite unexpectedly pointed out that, in fact, Hong Kong is not a separate country but a part of China. Cue complaints from both sides to the school’s Director, Emily Jones, and a rash of pro-democracy posters popping up over the following days. The assembly was later treated to a history of the ‘Putney Special’ dinner, a proud culinary idiosyncrasy which also sharply divides all those that encounter it. 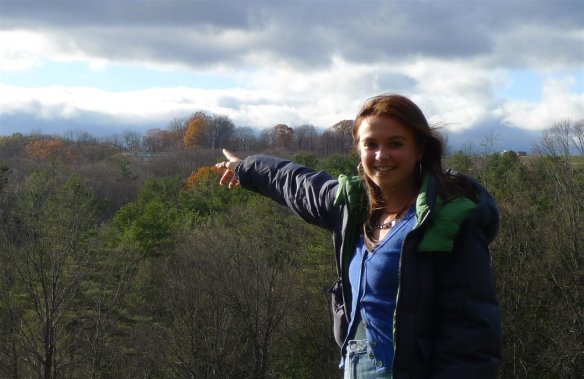 The students are, of course, here to work, and before long they were in classes ranging from ‘Anatomy & Physiognomy’, where Max’s head was meticulously measured while he ate his breakfast, to ‘Say What You Mean’, a journalistic creative-writing class, as well as timetabled lessons on Drawing, Sculpture, and Shakespeare among many others. Each day features no more than three hour-long (occasionally 90-minute) lessons, usually with at least an hour between lessons for meetings and independent study. It certainly has a ‘free-range’ feeling: Bedalians often take a while to adjust to the level of freedom offered to them when it comes to managing their time.

A key part of the experience is ‘work jobs’, where students take on vital roles in the running of the school. Max and Ming are on lunch duty while Zoe and Jack help look after dinner clean-up, and Anna, Lally, Kipp and Olivia are on ‘Classroom Cleaner’. These aren’t cosmetic activities, or busy-work; if the students don’t do it, it doesn’t get done. 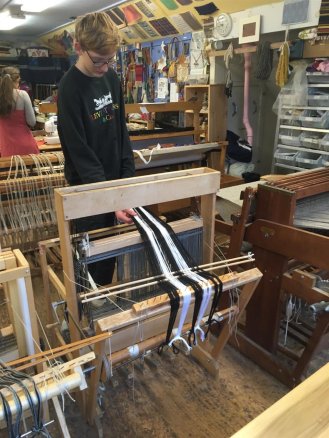 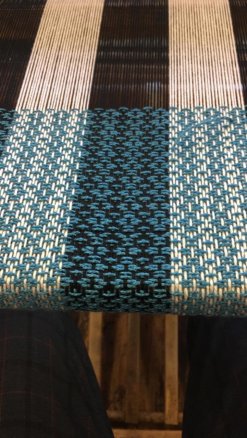 The student Work Committee meet regularly to plan the week, and to upbraid non-attendees and give them another slot to make up the lost time. As a result, it is a rare table that is left untidy at the end of a meal, and we’ve even heard that particularly messy tables are shamed by the clean-up team on student ‘common comms’ emails. In the kitchens, students run the show: there is even one girl tasked with baking the school’s bread (I saw 45 loaves done in a morning, which will last the school two days.) Students are also tasked with farm work and ‘Woods Crew’, picking the tomatoes we ate today and cutting wood for the kitchen. 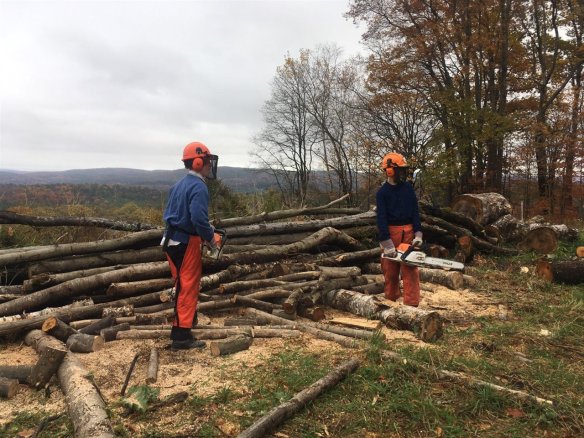 We caught the last of the spectacular Autumn foliage on the first days of our visit, but heavy winds and rain in the first week meant that most of it was at our feet by the end of the week. On this weekend’s walk up the deceptively-named Putney Mountain (it is, in fact, very much a hill) the forest floor was carpeted with the multicoloured leaves of red oak and maple trees which dominate the landscape. 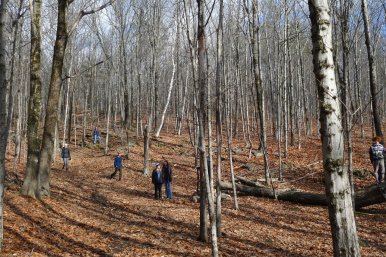 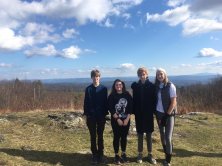 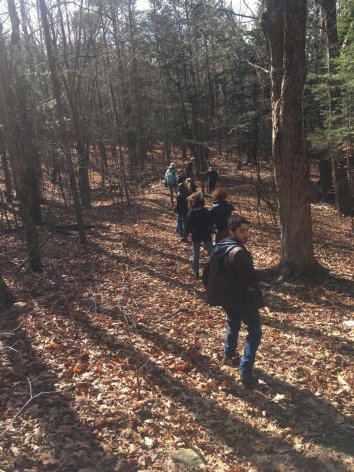 The weather was especially grim last week, but this weekend we caught a golden moment of sunshine and relatively mild days. However, freezing weather is on the way, and although we’ll have clear skies, it will be very chilly for ‘work day’ on Thursday, where the whole school puts down its pencils and gets out the rakes, hammers and brooms as the school estate is put to bed for the winter. 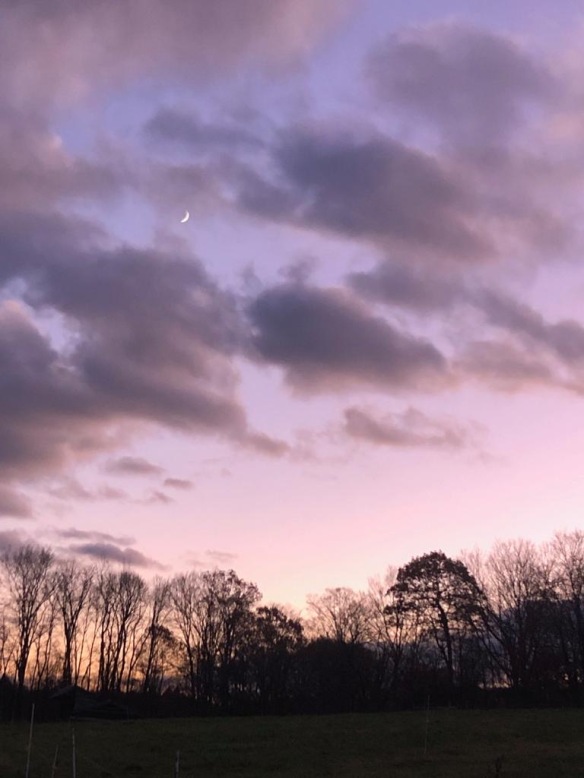 This Saturday sees a visit to historic Boston, prior to our getting the water taxi across the harbour to the airport. This year’s cohort has been far less ‘Putney is Paradise’ than on previous years’ trips, and I’ve heard lots of thoughtful and constructive comparisons between our two related but very different learning environments. The students are really looking forward to coming back to Bedales with fresh eyes and bringing the best of Putney into our own school.