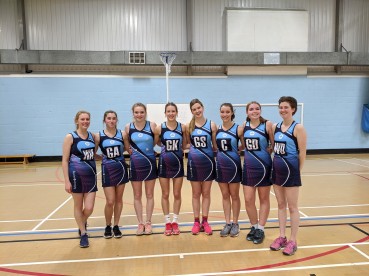 By Chloe Nicklin, Head of Netball

A well contested game of netball, playing against a strong Portsmouth Grammar School (PGS) team. With Maddie Jeffreys out due to Rock Show rehearsals, we recruited Alyssa Leach from Block 5 to set up as Goal Attack for the senior side. This meant the team had to adapt quickly to a new member of the team, which did see a few teething problems in the first half.

The score was tied in the first quarter, but as Bedales settled they were able to pull away with a two goal lead by half time. This Bedales side definitely has strength and numbers in defence, enabling the defensive end to be rotated regularly, bringing fresh legs and fresh energy to each quarter.

Nolly and Maddy Upton worked extremely well in the circle together, making numerous tips and interceptions. Shanklin and Charlie shared the Wing Defence position well, offering the reset option, which was essential to the newly formed attacking end. Hannah Mazas was integral to the success of the game, bringing great attacking and defensive skill to the game, joining play from one end of the court to the other. The PGS side also recognised this, awarding her Most Valuable Player (MVP).

A close game all the way to the final whistle, but Bedales managed to take the win 13-9.