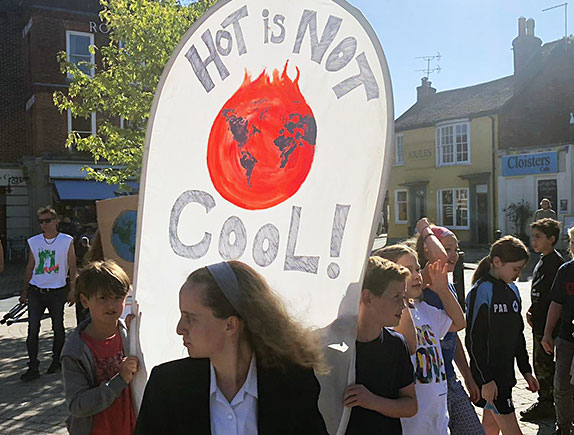 This article was originally published in the Old Bedalian Newsletter 2020.

The whole school community has been doing more to reuse, reduce and recycle in the wake of the climate change campaign that has been dominating the streets and the media, drawing attention to the urgency of the global changes that need to be made.

Bedales hosted a ‘Funeral for the Planet’ earlier this year, where a climate emergency was announced. The event was organised by Bedales Head of Geography Paul Turner, who became one of the UK’s first United Nations-accredited climate change teachers. Bedales’ Geography department has also recently launched the UK’s first climate breakdown scheme of work, collaborating with other teachers and organisations.

Following this, a group of 60 students joined a climate change protest in March, marching from Parliament Square to Buckingham Palace and were encouraged by the amount of support they received from tourists, construction workers and even police officers. Students took part in more protests in Petersfield and in London, with a small group attending a symposium on climate change at the London School of Economics. A number of speakers were present including Lord Stern, Chair of the Grantham Research Institute on Climate Change and the Environment, who addressed the question of, ‘What should individuals, communities, schools and universities do to stop climate change?’

Olivia Grout-Smith, 6.2 student, who attended the talk explained: “In order to make actual change within schools, universities and colleges, the importance of education about the climate crisis within the curriculum was a key point. Though some students decide to take Geography GCSE and A Level, others do not. Another idea discussed was to install a carbon offset scheme, so when students travel by plane or another environmentally damaging mode of transport, they can balance out the impact on the environment.

“We came away from the symposium with a true feeling of inspiration and pride. One of the speakers, Naomi Oreskes from Harvard University, said, as a school or as individuals, we can change. She expressed that when we make statements or propositions for the future, we are sometimes criticised for being ‘unrealistic’ but it is exactly those unrealistic goals that drive social change and innovation that lead to a positive impact.”

Students’ involvement on climate issues follows a long tradition of political engagement at Bedales. In 2016, the school introduced a unique Bedales Assessed Course (BAC) in Global Awareness covering global issues such as sustainable development as well as poverty, equality, social justice, human rights, globalisation, gender and peace and conflict. Campaigning and activism are a critical element of the GCSE-level course, with students taking an academic approach, critically examining the different perspectives of an issue – such as climate change – and drawing on numerous sources to present an argument. This year the school’s offering was extended to sixth form students, with a Pre-U in Global Perspectives and Research.

Bedales remains committed to reducing the school’s environmental footprint by monitoring water and energy consumption, waste, printing and the use of single-use plastic. Printing dropped by 5% in November compared with last year and colour printing decreased by 18%. We were also pleased to announce that the students’ drinking mugs have been replaced by reusable coffee cups constructed from recycled chewing gum, produced by Gumdrop, the innovative venture of Old Bedalian, Anna Bullus (1998-2003).

“As a designer, you have a huge responsibility to put things out that meet certain social and environmental criteria,” Anna observes. “That’s something that is not only ingrained in me but has also given me the most amazing pleasure. We’re all so much more aware of our debt to the environment – the question is whether we’re doing enough about it.”

We were pleased to interview Anna for an OB profile in the summer of 2019 where she explained how she came up with her idea for Gum-Tec and how it grew into a successful global business. Read more about Anna and Gumdrop on our website.

Another Bedalian getting creative in reusing and recycling items is Victoria Knight (2003-06), who has been producing jewellery from used coffee pod capsules.

“The joy of Bedales is that it nurtures individuality, creativity and the appreciation of beauty. My love of designing and making comes from Bedales,” reveals Victoria. “I enjoyed choosing which extra-curricular activities to participate in. There was always such a wide range of choices: silversmithing, pottery, photography, spinning and knitting. The list of artistic activities seemed endless. Each one I tried taught me a new skill and it made me see the importance and value of seeing a project through.

“Outdoor Work provided a chance to be entrepreneurial. I remember one term, Peter Coates (staff 1989-2014) let me and some friends create fairies out of feathers, leaves and other items found in the woodland. We sold them weekly along with the baked bread. It was a great example of John Badley’s ethos of ‘head, hand and heart’.

“My business, Coffee Pod Creations, started when I was having coffee with a friend who used a Nespresso Machine. I was horrified that the colourful pods were used once, then discarded. I didn’t want them to end up in landfill, so I took a bag and cleaned each coffee pod. I mixed the coffee granules in with the garden compost and used the aluminium pod for jewellery.

“The first piece I made was a bold, floral necklace. It took me many attempts until I created something I was happy with. When I wore it, the necklace was admired a lot and became a talking point as people couldn’t guess what it was made from. This provided me the opportunity to share the story. I now design and make a wide range of jewellery from brooches and earrings, to cufflinks and keyrings. My designs are continually evolving, as I love the challenge of creating something new.

“Bedales taught me to question both how and why. It broadened my mind to think not just about school and GCSEs but the wider world and how our actions affect others and the world’s limited resources. That’s exactly what Coffee Pod Creations helps; the turning of discarded aluminium into original and distinctive pieces of jewellery. I have Bedales to thank for giving me the confidence to try new things, to work with my hands and develop the skills required to exhibit and sell my unique jewellery.” Victoria concludes.

“Our wildlife, pollinators and birds are facing a near apocalypse due to loss of habitat, litter and pollution and humans are suffering; both our mental and physical health, from a disconnection from nature,” Alana observes.

Urban Pocket Wild-Scaping, or ‘Pocket Protection’ is an initiative that unites the UK population by getting people to buy and protect miles of council-owned unused patches of land across cities and towns. “The scheme is backed by environmental scientists, ecologists, wildlife experts, professional environmental researchers and global urban planners.” Alana continues. “The aim is to re-wild these patches of land by working with ecologists and rewilding specialists by planting wildflowers, shrubs, plants and hedges, to transform them into havens for struggling wildlife such as small mammals (like hedgehogs) and birds, butterflies and bees.”

“We have partnered with Clean Up Britain and a number of wildlife rescues and are collaborating with People’s Trust For Endangered Species and some of the top ‘Green Space’ research academics in the UK. Everyone is welcome to join us with this practical, positive and uplifting work simply by connecting with me through my website (https://www.missionmilly.com/power-together) or joining the Facebook group (https://www.facebook.com/groups/bettertogetherpeoplepower/). You’re even able to nominate your local areas for rewilding too.”

It is not just students and OBs that are helping the community in becoming more environmentally friendly. Current parent, Lucy Ogilvie-Grant, has set up a clothes exchange in school, known as the G&T (Give and Take), or Bedales Freeshop. The shop enables all members of the community to donate items of clothing they no longer want or need , as well as pick up ‘new’ clothes for free.

Lucy was motivated to launch a project to address the environmental impact of so-called ‘fast’ fashion, which sees mass-market retailers rapidly produce inexpensive clothing in response to trends. She explained: “The idea came from three directions. I’ve often visited a community in the North of Scotland called Findhorn where they have a ‘boutique’, which is actually a little shed, where you can take or drop off clothes as and when you need them. I was struck by the lovely sentiment of ‘the gift’ of the clothes with no strings attached. Secondly, I was inspired by Mark Boyle, a writer and jounralist who became known as ‘The Moneyless Man’ after he documented his year of living without money of any kind. He was instrumental in setting up the community, The Freeconomy which is centred around sharing – not bartering or buying. Lastly, I was surprised to see how vulnerable my children were in being defined as consumers. I thought the Freeshop could take away some of the negative elements associated with fashion.”

Recent research published by Oxfam revealed that buying just one new white cotton shirt produces the same emissions as driving a car for 35 miles – and the emissions from all the new clothes bought in the UK each month are greater than those from flying a plane around the world 900 times.

Bedales students were challenged to ‘make do and mend’ and avoid buying brand new items of clothing, with three end points: half term on 23 October, the Whole School Dance on 28 November, and Christmas Day. Instead, they have been encouraged to pick up second-hand items of clothing at the Freeshop or charity shops in Petersfield.

“The first main element of the Shop is that it is concerned with items of clothing that already exist; the shop does not use energy nor materials for production when all the clothes humanity will ever need have already been made. The second is that there is no money involved; students can give what they don’t need and can take what they want. Removing money means the G&T shop can become a place of community that doesn’t rely on commercialism; where the sustainable free flow of clothing symbolizes trust between those who visit.” commented Aidan Hall, 6.2.

“From my perspective, the shop has gained a huge amount of respect from the school community,” continues Aidan. “The large crowds seen in the shops and pouring out of it, clad in faux fur and denim, certainly point towards its popularity. By continuing to provide this regular interaction with sustainability, students can burst out of the ‘Bedales Bubble’ with a more informed and wider perspective on fashion in our society.”

The same week the shop opened its doors, was also the time the school received three refurbished Elephant Bikes, to provide a new environmentally friendly transport for Bedales students and staff. Elephant bikes are old Royal Mail postal bikes which have been repaired by prison inmates, allowing them to also gain their Cytech qualification. For every Elephant bike sold in the UK, a second bike is donated to its social enterprise based in Malawi, where owning a bike means individuals can secure work, generate an income and access an education.