Moths are declining in the UK. Studies have found the overall number of moths has decreased by 28 percent since 1968. The situation is particularly bad in southern Britain, where moth numbers are down by 40 percent. Many individual species have declined dramatically in recent decades and over 60 became extinct in the 20th century.

These alarming decreases in moth populations are not just bad news for the moths themselves, but also have worrying implications for the rest of our wildlife. Moths and their caterpillars are important food items for many other species, including amphibians, small mammals, bats and many bird species.

The reasons for the loss of moths are likely to be many and complex, including changes in the way we manage our gardens, pesticides, herbicides and light pollution. Climate change appears to also be affecting moths.

However at Bedales moths appear to be doing very well. Over the last few months, I have been putting out a ‘light trap’ once a week to attract moths and have so far found just over 100 species, including 4 types of hawkmoth – elephant, pine, poplar and the giant privet hawkmoth which has a 12cm wingspan.

Many of the moth species we have at Bedales are masters of camouflage – such as the Buff tip, which disguises itself as a birch twig and the Flame which has evolved to resemble a broken stick.

My favourite to date has to be the wonderfully named Merveille du Jour which translates roughly as ‘the best thing I’ve seen all day’ –  pictured above (bottom right) merging into lichen on a fence behind the science department.

Many moth caterpillars feed on grasses and it appears that the policy of keeping  areas around the school uncut is reaping rewards for both moths and the many other species that depend on them. 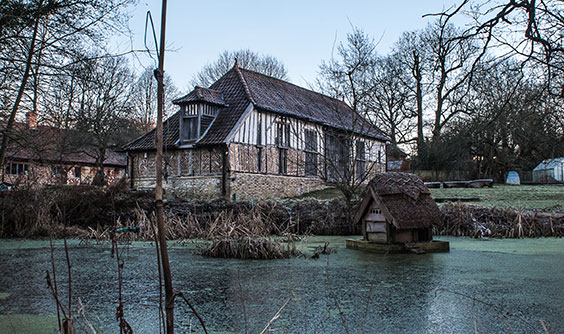 Over the past few weeks, in collaboration with a group of Block 3 Outdoor Work students and the Sustainability Group, we have begun the huge task of cataloguing the school’s biodiversity.

We started with the Lake, where we discovered 28 different species of freshwater animals, including water boatmen, dragonfly and damselfly nymphs, whirlgig beetles and flatworms. A walk around the centre of the site revealed 38 species of tree and 19 birds, such as the green woodpecker and nuthatch. The use of a moth trap also showed there were 14 moth species in the wildlife garden behind the Science department, which is remarkable, considering it is late in the year.

END_OF_DOCUMENT_TOKEN_TO_BE_REPLACED 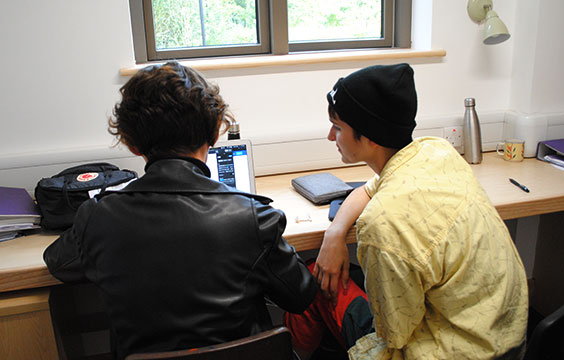 The first phase of the refurbishment of the old Art and Design buildings to create new student studies is complete, and 80 study spaces (pictured above) were opened just after the start of this term.

Designed by Richard Griffiths Architects, with the interior completed in consultation with Old Bedalian and current Governor Anna Keay, the second phase started immediately after the first. The old Art buildings were stripped of anything that could be recycled ahead of their demolition at half term, when we also took the opportunity to remove the first two of the Academic Village buildings. A new building – a timber-framed structure clad in oak – will be built on the footprint of the old Art building; once complete it will offer our students excellent facilities in which to learn and spend time.

END_OF_DOCUMENT_TOKEN_TO_BE_REPLACED 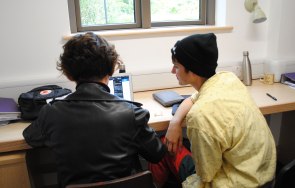 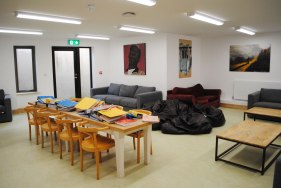 The first phase of the new student studies are complete and are currently being used by 80 6.1 students.

The high quality study spaces, which can be found in the old Bedales Gallery and Textiles building, were designed by Richard Griffiths Architects and the interior was completed in consultation with Old Bedalian and current Governor Anna Keay.

The second phase has now begun, with demolition work currently taking place that will enable a new roof to go on the old workshop, before the former Art buildings are removed ahead of reconstruction. The final building will be an energy efficient, high quality space for students, and the old academic village will vanish.

Completion of the whole project is anticipated for the start of the Autumn term 2020, and we will update you as the project progresses. 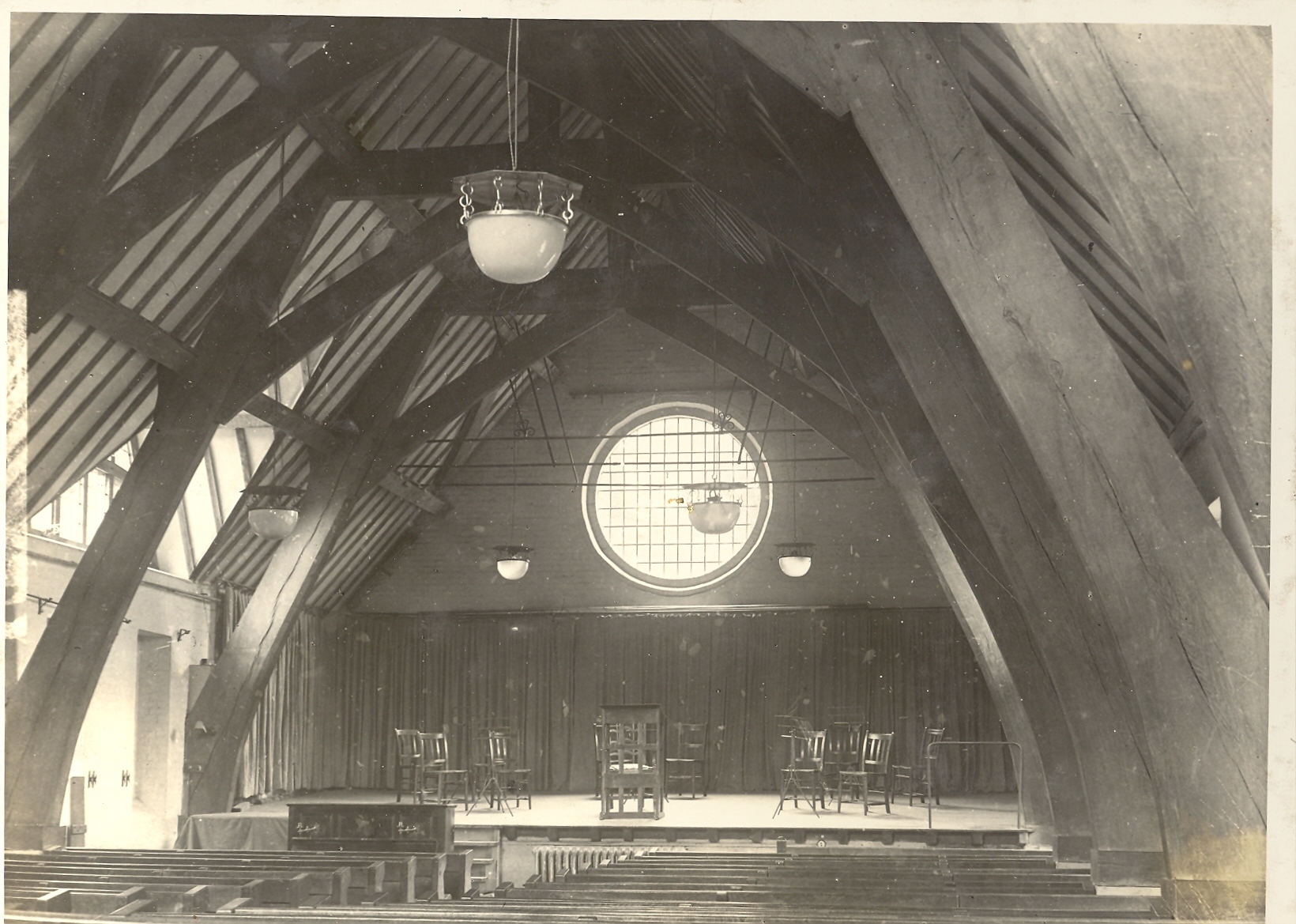 My first memory of the Lupton Hall goes back to the thirties and my single-figure age, just at Dunhurst. I had heard that a play was to be performed there and decided to see it. I was told that I couldn’t as it was “unsuitable for young children”. A challenge there! I slipped in with the audience and slid under one of the pews near the front. Somebody saw me and hauled me out ignominiously. Some years later, once I had moved up to Bedales, I suffered many bum-numbing Jaws, admirable though the principle. How many activities come to mind: speech competitions, Merry Evenings, Gilbert and Sullivan, Shakespeare when not outdoors. Details like Paul Williamson (1940-46) clasping his hands over his chest, declaring, “I never apologise!” Bob Collet’s (1919-22, staff 1929-46) amazing hands playing Liszt; or the melting tones of Gervase de Peyer (1939-43) and Mozart.

The green rooms below were often used as practice rooms where in anonymous privacy one could loudly wail out one’s sol with Kol Nidrei and the like.

My most striking adventure was musical. Two flautist friends, Geoffrey Spencer (1939-48) and Jan Fabricius (1942-46), got together a small band of volunteers to play a Brandenburg Concerto. Our first rehearsal was nearly terminal. With no conductor, we were all at sixes and sevens. So one after another, a player stood up and waved hands and arms around but, astonishingly, completely out of time. Finally Jan said: “Ali, you’ll have to do it”. Unconfident, I pulled a twig from Miss Hobbs’ (staff 1920-47) beautiful flower arrangement, and waved it around. Amazingly it seemed to work. Rehearsals became fun. Our music master, Harry Platts (staff 1937-46), got to hear of our venture and lent me his baton and lots of advice. We were to perform with the whole school. “Start off with a bold upswing of the baton,” Harry advised.

The two soloists stood close below me. I swung the baton up with a bold upswing. The tip caught Geoff’s music and sent it flying over the orchestra to land on the resting big drum below the stage. Kerplonk! The next few bars were drowned in laughter.

We used to get many lovely musical performances, from staff, pupils and visiting professionals. The Griller Quartet were much loved. All four were drafted into the RAF and turned up one visit in their uniform blue. Late Beethoven, out of this world. Except that the cellist’s buttons rattled hideously against his audience. Between two movements he called out to the audience, “Can anyone lend me a pair of scissors?” Someone produced the scissors. The cellist then cut off all his buttons.