Discarded silk has been given a new lease of life by pupils at Bedales and Bedales Prep, Dunhurst this year. Off-cuts of silk from premium homeware designer Porta Romana have been recycled and used in pupils’ fashion creations, including garments created by A Level Fashion & Textiles students at Bedales Senior (like this bomber jacket by Gala Pearson) and Block 2 (Year 8) pupils at Dunhurst. The silk, which would otherwise be thrown away, is rescued from Porta Romana by my wife Sian, who has worked for the Farnham-based company for four years.

See photos of the garments created with the silk below.

At Bedales Prep, Dunhurst, pupils will mark Mental Health Awareness Week with a Pupil Voice Conference on the topic of this year’s theme – loneliness. Like Bedales Senior, where the School Council was one of the first in the country when it was established in 1916, Dunhurst has a long tradition of listening to pupils’ views. Today, empowering children to find their voice and put forward their views is just one of the school’s initiatives designed to support pupils’ wellbeing and mental health – but it is far from a tick-box exercise. At Dunhurst, the wellbeing of its pupils is at the heart of everything the school does.

It is especially noticeable at this time of year, when most prep school pupils around the country are preparing themselves to sit the Common Entrance exam. Head of Dunhurst Colin Baty considers Common Entrance “an antiquated way to select” and cites evidence around adolescent mental health as a reason to exercise caution when forcing prep school children to jump through such hoops in preparation for senior school. As such, Dunhurst pupils do not sit the Common Entrance exam – and instead use the time to head off on ‘Camps Week’, a whole school residential trip to different areas of the UK, where they take part in a plethora of outdoor activities, including mountain biking, moor walking, cycling, kayaking and horse riding. As Dunhurst’s Deputy Head (Pastoral) Graeme Thompson explains: “We give our pupils the space and time to grow. Each child experiences childhood at their own pace.”

Camps Week is an example of pupils’ access to green and blue spaces – such as parks, meadows, woods, rivers, lakes and sea – which, as studies show, have a positive, immediate and long-lasting effect on people’s health and wellbeing. At Dunhurst, however, pupils don’t need to leave the school grounds to access green spaces; the school, along with Bedales’ senior and pre-prep schools, is set in 120 acres of South Downs National Park, and pupils are encouraged to spend as much time as possible outdoors. Uniquely, the school’s Outdoor Work curriculum – a core subject which incorporates nature and conservation, horticulture, animal husbandry, bushcraft and country crafts – enables pupils to develop an awareness, appreciation and knowledge of the natural environment in line with Bedales’ founder John Badley’s original aims, whilst developing self-confidence, passion, empathy and teamwork.

As part of the curriculum, Dunhurst pupils are actively involved in the care of the Outdoor Work department’s chickens, ducks, guinea pigs and bees, and there are opportunities to feed and care for other livestock on the Bedales estate, including pigs, sheep, goats and ponies. But interaction with animals – which is proven to have a calming and de-stressing effect – isn’t limited to the school farm. As a dog friendly school, staff dogs – or the ‘pastoral pups’ as they are affectionately known – are a familiar fixture. From Colin’s Goldendoodle to the boarding house’s resident Black Labrador, the dogs are an integral part of school life and provide pupils with an array of cognitive, social, emotional, physical and environmental benefits.

Fundamental to Dunhurst’s approach to wellbeing is relationships, which is ingrained in Bedales’ distinctive ethos. The school’s founding motto, ‘Work of Each for Weal of All’, may be over 100 years old, but it hasn’t faded in relevance. “The school motto underpins everything we do,” says Head of Wellbeing Debbie Baty. “Every pupil has the right to enjoy a childhood at school, but this right comes with a responsibility to be a positive influence within the Dunhurst jigsaw.” The ethos offers opportunities for pupils to support fellow pupils – for instance, peer to peer listeners, known at Dunhurst as ‘RAKtivators’, promote ‘Random Acts of Kindness’.

In contrast with other schools, staff and pupils address each other by first names, and pupils shake the hands of all staff after assemblies and talks – features of a culture that values the individual and celebrates relationships with one another and the school. Such an approach allows for a closer collaborative relationship between teachers and pupils, and this collegiate approach is extended to parents through three-way communication between teachers, parents and pupils known as the ‘Dunhurst triangle’. Debbie has recently launched a ‘Let’s talk about…’ series for parents, which will focus on teenagers’ development as well as sharing the content of pupils’ Wellbeing lessons, which supports and teaches skills to enable children to increase their awareness of emotional health and wellbeing.

Whilst wellbeing is at the heart of everything Dunhurst does, it isn’t at the expense of academic success. In fact, Deputy Head (Academic) Andy Wiggins says: “It’s always been borne out, year after year, when we look at how Dunhurstians perform when they take their GCSEs and A Levels, and compare them with students who have been academically ‘hot housed’. Time and time again, Dunhurstians prove that they get comparative or better results – and they’ve had a much richer, holistic experience.”

By Doug McIlwraith, Director of Music

One of the most difficult music events to organise during the pandemic was the Three Schools’ Concert. However, we managed to find time for musicians and singers from all three schools to meet and work together this week and the result was a very enjoyable concert with some wonderful music and a great feeling of community spirit.

Ben Harlan was inspirational in leading the orchestra in music by Purcell and Dvorak and this included many players form Dunhurst and Bedales. Dunhurst music scholars Tommy Hornsby and Eliot Santos (both Block 2) gave stunning solo performances on the cello and violin, demonstrating the musical ambition inherent in the artistic ethos at Bedales, and Bedales music scholar Leela Walton (6.1) gave a very mature and emotional rendition of Tchaikovsky’s Canzonettafrom his Violin Concerto. It was particularly wonderful to hear from Leela as she is one of our many musicians who joined in Dunannie and now lead the music in the senior school.

Music from our contemporary musicians demonstrated the variety of musical interests that we nurture at Bedales and Dunannie brought the house down with their song Baby Beluga which told the story of a little white whale. Singers form all schools then joined to sing Stand By Me by Ben E King with a solo from Joel Edgeworth and the concert ended with some rousing singing by everyone of the four gospel favourites.

We thought it was important for the Bedalians to inspire the younger musicians but it was clear on this occasion that that influence worked from the bottom up and the talents and enthusiasms of the Dunhurst and Dunannie pupils had a miraculous and enervating effect on our older musicians. We look forward to more three schools events in the near future as they are a wonderful way of celebrating what the Bedales community has to offer.

By Graeme Coulter, Head of Tennis

On Saturday the finals of the intra school tennis tournaments were contested, with parents able to come and watch for the first time since the start of the pandemic. Six finals were contested over the course of six hours.

Harry Hornsby and Nikolas Beecham took on Hari Walton and Tommy Hornsby in the boys doubles. The youngsters from Dunhurst played to a truly outstanding level to win 6-0, 1-6, 10-5. The mixed doubles was very closely contested by Paddy Arrowsmith, Sasha Arney, Tobias Bonham Carter and Jade Mark. This final was a brilliant match where momentum flowed form one pair to the other. It was eventually won by Paddy and Sasha 6-4, 6-7, 10-5. Grace Vernor-Miles, Lally Arengo-Jones, Sasha Arney and Alisia Leach played the girls doubles final. This was another close match where either side could have won, but Grace and Lally held their nerve to win for the second year running 6-4, 7-6.

The junior girls singles was played between Lola Mackay and Rebekah Leach. This was an outstanding match and both girls showed amazing grit and determination to compete through injuries. Rebekah was victorious after nearly two hours 6-4, 3-6, 10-6. The Junior Boys singles was contested between Nikolas Beecham and Hari Walton. Both players played very well with Hari winning in straight sets.

The final match of the day was the senior boys singles. This was played between Tobias Bonham Carter and Hari Walton. This was the best final I have seen since the introduction of the intra school tennis tournaments 12 years ago. Hari won his third title of the day 6-4, 7-6, but credit to both players who were absolutely outstanding. I could not have been more proud of all those involved. You were a huge credit to Bedales Tennis and Bedales School as a whole. 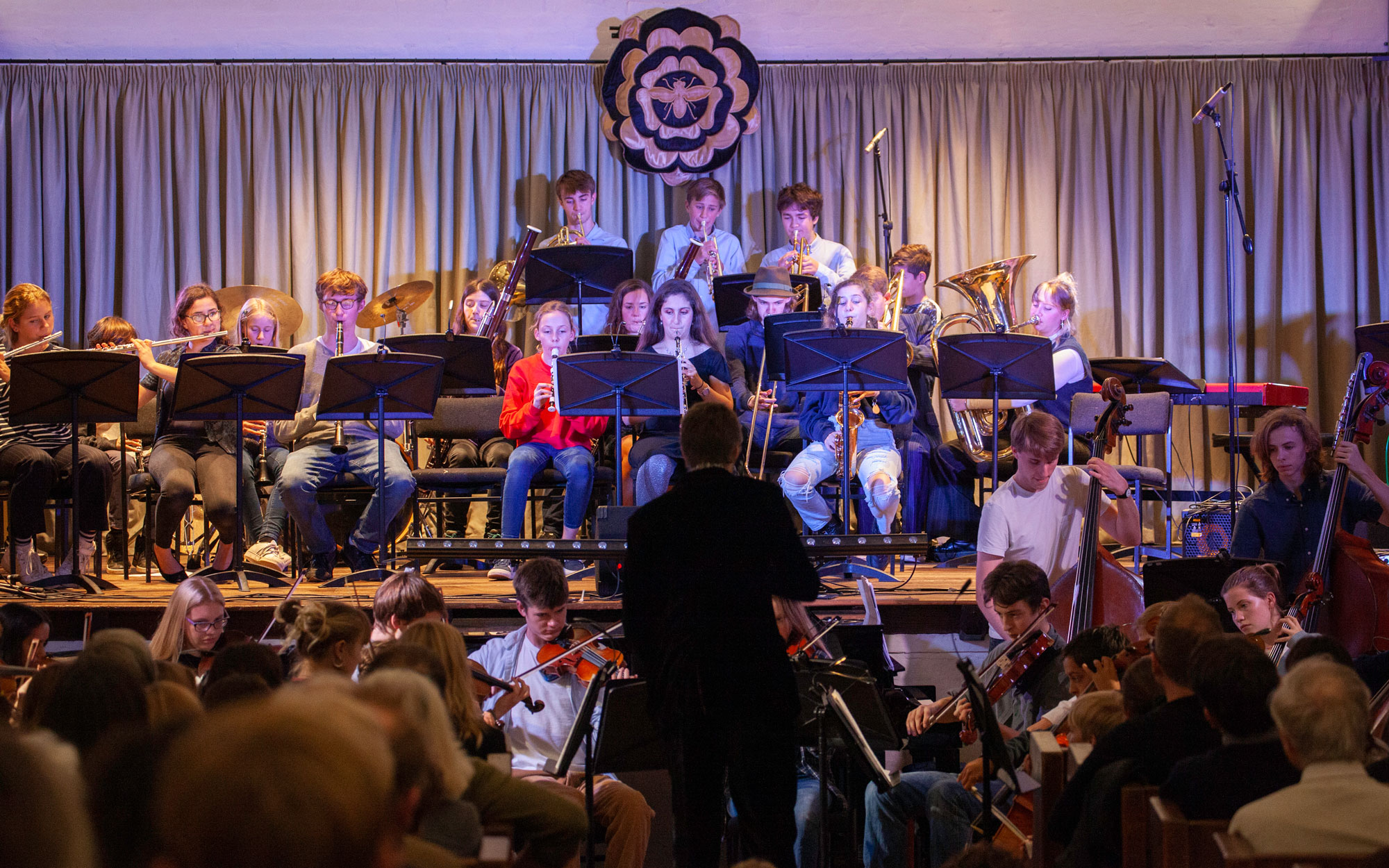 The Thursday before half term saw a wonderful musical collaboration between Bedales, Dunhurst and Dunannie in the third annual Three Schools’ Concert. A packed Lupton Hall witnessed a night like no other with 83 students taking part, ranging in age from seven all the way up to 18.

There were performances featuring each school, including Head Girl Lara Rippinger’s take on Esperanza Spalding’s I Know You Know, Group 3 Dunhurst student Eliot Santos’ show-stopping performance of Karl Bohm’s Perpetual Motion and the Dunannie Year 3 choir’s wonderful performance of Under the Sea from The Little Mermaid.