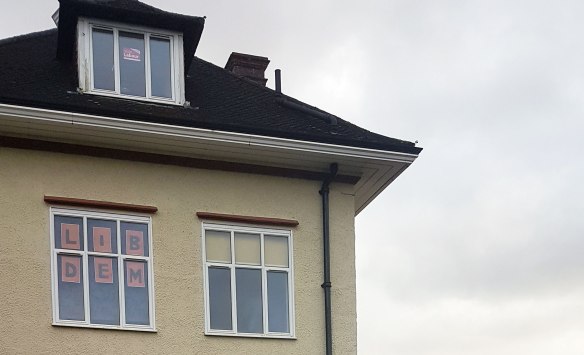 Following this, students and teachers came to vote. We had a proper electoral register, with student registrars signing off ballots, and there were no spares. Anyone who spoiled their ballots couldn’t vote. Students voted on paper, in booths. The ballot boxes then made it to our crack team of counters. Each tutor group was a constituency, each group of tutors was its own constituency, and house staff were another. Twenty-five constituencies were needed to make it ‘past the post’.

Results came in, and we were hoping to be able to share preliminary findings when students returned to the Quad after voting. Our counters were so amazing, though, that we had the full result: a landslide for the Liberal Democrats. Well done to Connie on her election!

In my 11 years here, this is a very noticeable shift: like East Hampshire, Bedales has often been a safe Tory seat. As the Lib Dem candidate herself said, perhaps this general election is not a general election “but a second referendum in disguise”, and if so, it tells us a lot about how Bedalians feel about the prospect of an exit from the European Union.

Perhaps the best lesson learned for students was actually living the experience of voting in a first-past-the-post system. Many student said, “but I voted Labour, and so did my friends – what happened?” This was a good education in the differences between voting by constituency versus proportional representation (PR). We are yet to work out what the result would have been under a PR system: at first glance, a Lib Dem win, but a more closely-run match.

I would like to thank Abi Wharton and her extraordinary band of volunteers, who made it by far the best mock election I have seen here, and from a school that has had a student council since 1913, another valuable way of modelling an education in democracy.